Before the Yuletide Season fades away, just bit about Christmas Spirits–I mean REAL spirits–apparitions, ghosts and assorted paranormal encounters associated with Christmas and the Solstice season.

First on the list?  Why Santa Claus of course! He goes by many names: Americans know him as Santa Claus, but also goes by Father Christmas, Papai Noel, Sinter Klaas, Babbo Natale, Pere Noel and a whole slew more monikers around the world.

Foremost among the Spirits of Christmas is St. Nicholas himself.

I know: you don’t think of Jolly Old Saint Nick as a ghost. .  While you may not think of him as a ghost per se, the truth is he is a spirit, and at one time was a living, breathing person who walked the earth.

So, to paraphrase the famous essay in the September 21, 1897, edition of The (New York) Sun, yes, Virginia, there is a Santa Claus.  That, after centuries he is overlain with rich myth and legend and his duties have grown exponentially, is understandable; but he is very real.

St. Nicholas was born in Anatolia (modern Turkey) about 350 miles northwest of Bethlehem, in Patara, sometime around AD 270.  He was at one time bishop of Myra, another town in Asia Minor and he is first and foremost the patron saint of children.

For those unversed in Orthodox beliefs and practices, Christian saints are generally referred to in the present tense, for although their physical form is no more, their spirit continues to dwell among as, much as any ghost or spirit may. they are known to appear at various times and perform miracles–it’s what they do, after all.

Another thing about saintly apparitions: they can appear at two places at the same time. Given that knack, visiting every home where children reside in one night if you have no physical form is not so difficult a trick .

Even in ancient times St. Nick was known for his generosity. One story told of him was that, on hearing that three maidens were too poor to afford a dowry and therefore couldn’t get married, he anonymously threw a bags of gold through the window into their home.

After first two girls were married their father became curious as to whom he mysterious benefactor was and tried to watch out for him; so when the third was due to wed, to prevent his identity being found out, St. Nicholas threw the bag of gold down the chimney.

So, girls, if you’re very, very good, perhaps jolly old Saint Nick will throw a bag of gold down your chimney–wouldn’t that be better than a Barbie?

Of course, like the Blessed Mother (more about her and the BVM phenomena another time), Saint Nicholas adapts his clothing and customs to the particular country he’s in.

Our vision of him borrows a lot from German notions about Christmas, and some of his iconic imagery has more to do with Norse Mythology than Christianity. In more recent years, sadly, the formerly slender Jolly Old Elf seems to have gained way too much weight and seems to be doing a lot of commercial appearances for large corporations.

Nevertheless, despite all the naysaying and negativity about him these days, Santa is as real as any other saint.

So to all those cynics out there who scoff at ghosts and such things and would have you doubt Saint Nicholas as well; may you all get lumps of coal this Christmas.  Ho, ho ho!

For more authentic ghosts stories and true accounts of apparitions, go grab a copy or three of  Strange Tales of the Dark & Bloody Ground or Ghosts and Haunts of Tennessee.

Strange Tales of the Dark and Bloody Ground: True Tales from the Haunted Hills of the Mid South 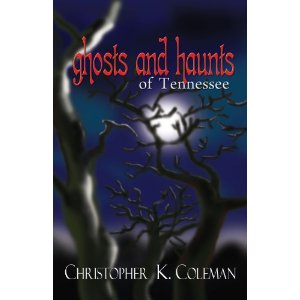 Ghosts and Haunts of Tennessee. True haunting tales of the Mid South